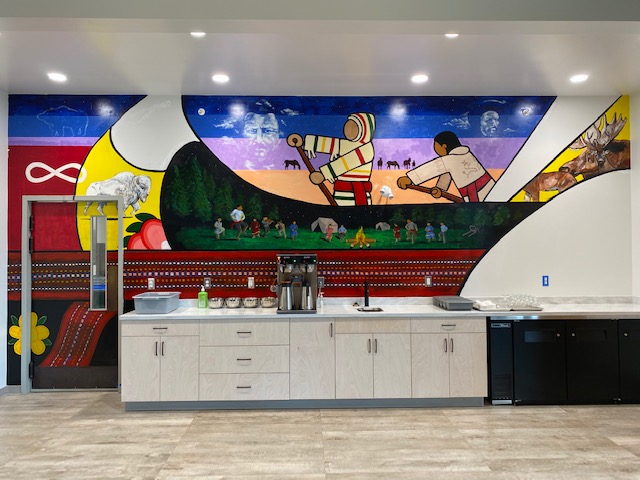 Métis Crossing is Alberta’s first major Métis cultural destination, offering visitors educational experiences, gathering spaces, and business development opportunities. When you visit Métis Crossing you will be immersed in the distinct Indigenous story of the Métis people and take part in authentic cultural experiences and activities.

Métis Crossing is pleased to be supported by a contribution from Husky Energy, one of our Threads of the Sash community partners. Husky recognizes the diversity of Indigenous Peoples and communities and has made it a priority to understand different Indigenous histories and cultures with the goal of creating mutually-beneficial, long-term relationships. Husky supports Indigenous initiatives that promote healthy communities, sustainable development and capacity building.

Husky’s contribution to Métis Crossing supported the work of Métis artist Stephen Gladue as he created a meaningful and beautiful mural inside the new Métis Crossing Cultural Gathering Centre.

“For companies like Husky, it’s important that our relationships with Indigenous communities are founded in respect, cooperation and encourage the right to self-determination, which we actively support through education and economic development,” says Janet Annesley, Senior Vice President, Corporate Affairs and Human Resources. “Our support of Métis Crossing is one of the many ways Husky demonstrates its commitment to our shared journey to Reconciliation.”

Q: Stephen, can you tell us a bit about your background and how you got into this type of artistry?

A: I became involved in artwork at a very early age. When I was growing up, I took notice that there was not a great deal of representation from the indigenous community, let alone the Métis people. Growing up where I did, I was encouraged to fill that void. Some time later after my schooling and getting myself established as a creative in the film and television world, I returned to my roots and began creating a few pieces that were aboriginal specific, this ultimately led to the creation of a few recognizable works in the Métis community.

Q: What does the mural represent? Can you describe some of the different elements?
A: I focused on traditional motifs and themes for this piece, the thought behind the work was that it should incorporate both the history and the present. From Voyageurs traversing across eastern waters to the evening celebrations in the plains. Each subject painted adorns traditional garments from head to toe.

I wanted to incorporate a sash obviously, so I created one of the largest most detailed ones I have personally ever seen. Some of the last details that I added were both Louis Riel and Gabriel Dumont, I put them in the clouds looking out over the entire piece. Lastly, I added a few constellations that have cultural significance in the deepest parts of the skies.