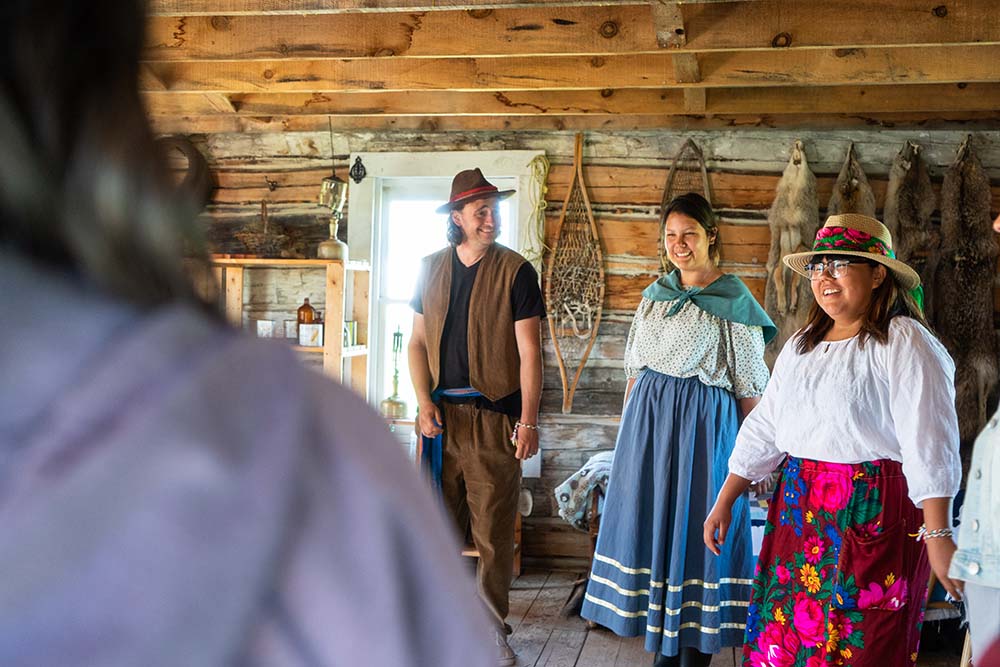 The History of the Métis Traditional Territory

The History of the Métis Traditional Territory

Métis, the French word for “mixed,” refers to the descendants of the First Nations people and the French traders and merchants who settled along the fur trade routes in the 1700s. The Métis became intermediaries between the European and Native cultures. Their descendants developed their own distinctive culture out of their communities that combined the French culture of their fathers and the traditions of their Aboriginal mothers.

The Métis are an important group in the history of Canada. Métis worked as guides, interpreters and provisioners to the European settlers. The Métis developed their own distinctive culture and sense of collective consciousness, both in a community sense and politically. Because the Métis understood both Aboriginal and European cultures, they helped create trading relationships between the societies. However, as more settlers came to North America, the buffalo declined in number. The fur trade dwindled in Europe, leaving the Métis with fewer business opportunities.

Although the Royal Proclamation of 1763 held the Crown responsible for the well-being of the Aboriginal peoples in Canada, the federal government abandoned its responsibilities for the Métis. Promises of land under the Manitoba Act went unfulfilled. The government neglected to give the Métis direct land grants, choosing to give Scrip certificates.

The Métis didn’t fare well as land speculators used their power to buy the Scrip unscrupulously. In 1885, a group of Métis attempted to resist the federal government. Despite local support for the Métis, the Canadian army defeated the Métis. Their leader, Louis Riel, was executed. Land ownership has been an issue for the Métis from the late 1800s through the 20th century. Even today, there are some issues over land ownership and mining rights in the historical Métis lands.

In 1982, the Métis were recognized as one of the three Aboriginal peoples of Canada, including Indians and Inuit. Canada has the only constitution in the world that recognizes a mixed-race culture. Ten years later, Riel was recognized as one of the Founding Fathers. A monument to his memory was established on the grounds of Manitoba legislature. Canada is recognizing the Métis culture and heritage, but there are still issues of land ownership and rights that are being addressed.

Originally, the Métis communities spanned throughout Canada and the northern United States. The French Métis settled mostly along the trade routes of the Red River. English-speaking Métis settled around Hudson Bay. The Métis homeland is often defined as the area along the fur trade routes in Manitoba, Alberta, Saskatchewan, Ontario, and British Columbia.

Alberta is the only province with a recognized Métis Nation land base. The Métis Settlements General Council represents and governs the Métis land. In 2002, the Métis General Council defined the “historic Métis Nation Homeland” as the area of land in central North America including the 3 Prairie provinces, extending into Ontario, British Columbia, Northwest Territories, and the northern United States, from Ohio to Montana.

Some Métis believe that only those descendants of the Red River Métis should be constitutionally recognized as Métis, because of their distinctive culture. However, the Supreme Court of Canada stated that “There is no consensus on who is considered Métis or a non-status Indian, nor need there be. Cultural and ethnic labels do not lend themselves to neat boundaries. ‘Métis’ can refer to the historic Métis community in Manitoba’s Red River Settlement or it can be used as a general term for anyone with mixed European and Aboriginal heritage.”

The Métis have some distinct symbols of their identity.

The sash worn by the Métis is probably the most recognizable element of their culture. The sash is literally “an arrowed belt,” that was more than just a way to keep your coat closed. The sash could be utilized in a multitude of ways. Most Métis wore the sash around their midsection, to carry the tools of their trade. The fringe could be used as emergency thread. The sash could be used as a tourniquet, when out on the hunt. Some used their sashes as a rope or pulley. Hunters would leave the sash on their buffalo kill to identify their property. The colors of the Métis sash identified allegiances. Although traditionally, the sash was only worn by men, today, both genders can be seen sporting a sash as a way of identifying with their heritage and collective consciousness.

The Métis fiddle is played with a bounce that isn’t common in most cultures. Traditionally, the Métis made their own fiddles because the cost of complete instruments was prohibitive. The music of the Métis is its own unique blend of Native rhythms and European melodies. It’s great to dance to, because it’s not choppy, nor regimented. The Red River jig is a dance between two partners who only use their feet to perform. The fiddle plays a high section while the dancers dance a traditional jig. In the second part of the dance, the fiddle switches to a lower tune, while the dancers create even more intricate footwork.

The Métis have many flags that represent their distinctive culture, but the two most prominent flags have the infinity symbol in white on a blue or red background. The infinity symbol is thought to represent the distinct unification of two cultures or that the Métis will survive forever. The blue background may come from the Northwest Company, while the red background represented Hudson Bay. The blue and white combination also reflects Scotland’s national flag. Red and white are prominent colors on France’s flag.

Historically, the Métis spoke many different languages. They were highly regarded as interpreters during their fur trade days. The Michif language is a combination of French nouns with Cree verbs. It’s their own language that fuses their two cultures. Here are a few easy phrases to learn in Michif:

Although the number of Michif speakers has declined over the past two centuries, there are efforts underway to preserve the Métis language.

The Métis attended mission schools where they learned embroidery techniques from the European nuns. These patterns were incorporated into the Métis framework. The Métis used seed beads and silk threads to create brilliant, colourful, and symmetrical floral designs on their clothing. This beadwork was usually done on dark backgrounds, then trimmed with colourful silk ribbons. The English flowers were much different from the traditional creations of the other Aboriginal groups, giving the Métis impressive artwork that is distinctive.

During the fur trade years, the Métis relied on buffalo and local game, supplemented with berries and plants. Pemmican was a way to preserve buffalo meat for life on the trail. The meat would be cut into long strips and left in the sun to dry. After a few days, the strips would be pounded into flakes. The flakes would be mixed with dried berries and melted fat. As the mixture cooled, it would be rolled into balls to be stored. Pemmican was eaten as is or cooked with flour and water to make soup.

The Métis merged European culture with native foods. Bannock is a campfire bread that is cooked over an open fire. It is a hybrid of the traditional Scottish bread and Indian fry bread.

The Métis were able to adapt European technology to life on the plains. One important innovation was the cart that helped them transport the heavy buffalo furs and large pieces of meat through the prairie landscape. The wheels were designed to take on the uneven terrain and creeks and rivers. Red River carts had to carry heavy loads without cutting too deeply into the soil. This cart could carry a load of a thousand pounds up to 20 miles a day.

The European men didn’t change their style of dress, but they did adopt to wearing moccasins in the wilderness out of practicality. Native women made these shoes and provided them to the settlers. Indian women also helped make winter travel possible by preparing the sinews and weaving the intricate webbing that provided the support in snowshoes. It’s easy to see why the men needed the Aboriginal women to survive the harshness of the land. Women offered knowledge for the European men, helping them survive and adapt to a new life.

The Métis are not European immigrants, nor are they First Nations, but they are now recognized by the Canadian government as Aboriginal peoples. Not only does Canadian law grant indigenous peoples special protections applicable to mining, but international law also recognizes rights for indigenous peoples when it comes to mining. The Métis have the right to participate in decision making about the future of their lands and resources.

Although there are protections for the First Nations and Aboriginal peoples pertaining to mining, in practice, the mining laws favour industry. The Nations do not get included in the consulting stages. When miners start to investigate a site, they can lay claim to territory without notifying the affected Nation. When the proposal is submitted to receive a permit for mining, the Nation only gets a limited time to respond. In British Columbia, that time frame is 30 days, which isn’t enough time to evaluate the proposal that has long-term effects.

Mining activities often threaten the territories where the Métis live. The proposed activities not only have an economic impact on the Métis, but the mining impacts the environment, culture, and health of the Métis. The Métis rely on wildlife as a source of food. Although food is readily available in grocery stores, the Métis cannot enjoy their cultural practice of hunting when mining operations take over.

Explore the distinctive culture of the Métis to learn more.